“Hi! I’m an instructional designer and working on a music theory course. What is the best way to write ALT text for music notation symbols (e.g., Treble clef or eighth notes)?”

Let’s focus on the larger implied question, “Is it possible to create an accessible online music theory course?”

A team (consisting of an instructional designer, music theory teacher, disability services personnel, and braille music expert) could develop an accessible face-2-face course; however, it is not currently possible in an online environment. Recent technological innovations may shortly make this possible, but testing and implementation efforts are needed.

A picture might be worth 1000 words, but good luck writing an ALT text for this.

Music theory is primarily the study and analysis of music through music notation, a moderately complex system allowing for the visual encoding of auditory information. Blind learners can not see visually encoded music notation; as such, they can’t learn to read, interpret, and analyze it visually. When learning music notation, and by extension music theory, it must be presented to another sense, primarily hearing or touch. In online environments, the standard tool for converting visual to audible information is ALT text. ALT text provides “textual equivalent” for visual information or images that are read aloud to blind learners (i.e., conversion from visible to auditory information). Unfortunately, due to its particular nature, it is not possible to represent visually notated music as text that can be read. 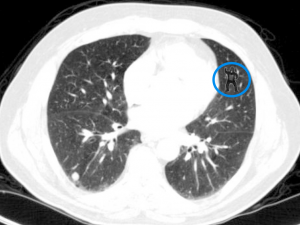 Harvard researchers found that 83 percent of radiologists didn’t notice the gorilla in the top right portion of this image.

If an activity’s main objective is to teach a learner to read and interpret visual images, no amount of ALT text will ever suffice. For instance, a blind radiologist can not learn to decipher a patient’s x-ray because it is not possible to capture the complexity of the slide and present efficiently to another viable sense. Further, even if students learn to parse your ALT descriptions, they still will not have learned to interpret the visual phenomena. They will only have learned to understand your text equivalents, that may or may not accurately capture the image to be studied, or be usable in other contexts. Without being able to apprehend the full range of information present in a visual representation, a blind learner will never be able to “read” that image. Music notation is a system that can not be presented fully through ALT text, even if an instructional designer (ID) works closely with a subject matter expert (SME) skilled in music notation and composition.

Teaching the interpretation of complex visual systems to the blind is not possible with ALT text, a notable limitation all IDs should understand and anticipate. FYI: Written English is also a complex system for turning symbols into auditory information, but thankfully college instructors are not required to teach a learner to read before they can participate in literary theory class. There are other significant differences between written music and English, which I will discuss below in addendum #2.

If converting notation to audio is not an adequate option, could music notation be presented tactilely?
Unfortunately for aspiring blind radiologists, there is not a system currently designed to allow for the interpret x-rays tactilely; there is, however, a system for the faithful transmission of music notation to blind learners; braille music notation. 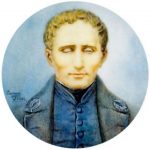 A braille display keyboard renders braille using the six-position cells used in braille notation. It seems reasonable, therefore, that they could be used to display braille music. However, music theory focuses on simultaneously sounding pitches. Current display keyboards render only a single line of braille, so it would be impossible to display more than individual notes or melodies. 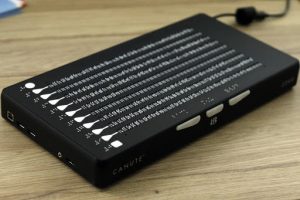 This technological limitation is currently the most substantial barrier preventing the creation of a fully online music theory class. Hopefully, the new Canute 360 multi-line e-reader developed by Bristol Braille Technology CIC, reportedly capable of rendering braille music, can be adapted to the online classroom. Innovations such as this will ultimately change the future of accessible online music theory. Your institution’s disability service unit should research the Canute to see if it is compatible with your LMS.

In a face-2-face classroom, all of a course’s musical materials need to be entered by a musician into a notation program, converted to braille, and physically embossed onto paper using a specialized printer. The braille expert’s assistance would need to annotate musical examples and format the components required for each of the assessments. A school with a robust disability services office should be able to accommodate these sorts of requests.

This video from Dancing Dots provides a great overview of the process. 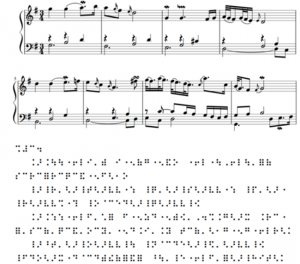 Is it reasonable to expect a novice to learn braille music quickly enough to be able to complete a semester-long music theory course successfully?

A simple rule of thumb: the treble clef wraps around the G line. 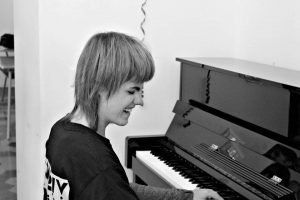 Pianist Rachel Starritt, the first blind student to study for a music degree at the Royal Welsh College of Music and Drama.

Further, most musical examples require explanatory markings, and studies show that learners are the most successful when these markings are integrated directly into musical examples (Owen & Sweller 2008). Putting explanations onto notation is not always practical, but when possible, descriptive information should be nearby. Proximity helps learners avoid the “split-attention effect,” a significant tax placed on working memory when information from separate locations or media must be combined to complete a task or learn a concept. A braille music expert could judge the feasibility of integrating explanatory texts into braille music; however, if not carefully considered, additional strains on a blind learner’s working memory should be expected.

Blind learners who have previously learned to read braille notation proficiently, should be encouraged to study music theory. Similarly, blind students will gain much enjoyment from learning to read notated music, returning to music theory at a later time. However, combining both tasks within a single semester may be expecting too much from all but the most dedicated. 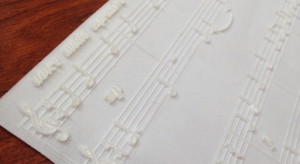 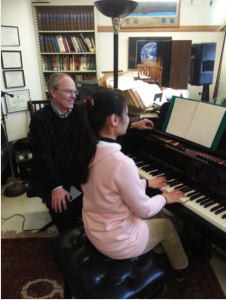 Yeaji Kim and Professor Todd Welbourne at a piano.

Yeaji Kim, a blind pianist and piano pedagogist from South Korea, has been working to develop 3d printed, embossed stave notation. This project, developed with engineering researchers at the University of Wisconsin, potential revolutionizes how blind students learn music.

One of the most challenging hurdles braille musicians face is their reliance on their teachers. Braille notation can not always capture the complexities of expression contained in traditional visual scores. As such, the music instructor is often needed to describe the more delicate details needed for a convincing performance. Further, most instructors can not read braille notation, so they are not able to determine what is a deficiency in the learner’s performance or a deficiency in the braille score. Printed embossed music would allow both participants to read from the same score.

A complication is that this system would require some blind learners, who can already read braille, to learn a new notation system. As such, it probably should only be introduced to new students, or to those that have lost their sight after learning music. Lastly, this technology has not been tested with new learners and not available commercially. It also requires some rather expensive 3d printing technology, which is not widely available outside of commercial settings. I would not expect to see this as an option for many years.

In the image on the right, Yeaji emphasizes that she is not sightreading. A blind learner can not read and perform simultaneously with the same set of fingers! 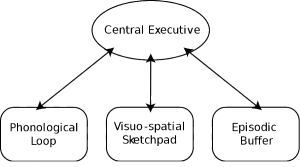 Contemporary theories mention four significant components of our working memories (Baddeley). These components included a central executive that focuses our attention and efforts and three “slave components:” the visuospatial sketchpad, the phonological loop, and the episodic buffer. Let’s focus on the sketchpad, located in the parieto-occipital region of both hemispheres. The visuospatial sketchpad (i.e., “the mind’s eye”) allows humans to identify, manipulate and rotate images, analyze spatial relations, and envision complex objects. It also comes in very handy as we navigate through the environment.

Blind learners, who have been blind from birth, use the visuospatial sketchpad differently. They use the sketchpad to store tactile information and envision the spacial relationships that exist between themselves and others objects (e.g., this smooth cup is close to hand, the table far, this sharp object is above my head, etc.). Indeed, blind learners are as able to perform the same manipulation tasks as sighted students, imagining objects rotating tactically rather than picturing objects turning visually.  (Cohen, Voss, Lepore, Scherzer 2010).

I point out these differences to explain why ALT text creation is demanding. As mentioned above, if an activity’s main objective is to teach a learner to read and interpret visual images, no amount of ALT text will ever suffice.

Why? I invite you to picture the following, admittedly improbable scenario.

You are an online instructor, teaching a group of bouncing three-year-olds their letters. One of your pupils, an unusually bright young girl, is blind. Your job is to show the learners how to identify each letter of the alphabet. How would you write the ALT text for the image on the right, so that our nice little girl can learn too? Remember, you are trying to teach the children their letters, so your ALT text can not only simply be “A.” “A” is the answer, so your blind learner would only be learning to listen to their letters, not learn to read them. So, do you describe the image as “two lines leaning against each other at a 45% angle with a cross-beam connecting them at the midpoint?” This is very awkward, but how would you verbally describe the visual qualities of the letter “A?”

Similarly, how should we describe the note (c-sharp) to the left? You could describe it as “five lines and four spaces, stacked alternatively, one on top of another, with a Treble clef at the beginning of the line. The notehead is on the fourth space from the bottom, with an added sharp sign.” Would this work?

When teaching a learner to interpret a visual image (e.g., the “A” and the “C-sharp”), IDs will find it very difficult to write descriptive textually equivalents without including spatial and visual information. Try it! Indeed, when writing ALT text, I quite naturally used my visuospatial sketchpad, picturing the image to be described in my mind’s eye. However, blind learners do not use their sketchpads to create these sorts of mental pictures. As such, any textual equivalent I write will be affected by my tendency to think visually, limiting its usefulness. Lastly, notice the length of these textual equivalents for even the simple image above. The amount of working memory needed to process these types of descriptions would be impractical. A picture is worth a 1000 words.

As instructional designers, we need to keep our radars active!
When presenting our learners with visual interpretation tasks, we should make sure to carefully and creatively consider how blind learners might accomplish them.