NotateMe Gives You Notation the Old-fashioned Way: by Hand…on the iPad

[title size=”2″]NotateMe[/title]
Are you one of those old stuffy types who insists that music should be written down on paper? After all, it has worked perfectly well since, oh, around the time of the Norman conquest (1066 A.D.), and paper has been the vehicle for great masterworks of Western music. Or are you the type to grab the latest electronic technology to see if it can do better? If you’re both, NotateMe might be for you.

Most composers these days use one notation software or another — Sibelius, Noteflight, Finale, Musescore, etc. — all of which work by typing the notation in via your computer keyboard or a MIDI-enabled piano keyboard. It’s inherently a bit clunky, but in most cases — as with most things — if you practice enough it goes pretty fast. And then ah… the magical editing powers you gain! Those Baroque composers with their ostinati could only dream of copy-paste, or features like the highly popular “R” repeat command in Noteflight. But some argue, not without justification, that notation software removes composers — especially those just learning — from actually having to understand notation deeply. It’s just all too easy to fill a score with reams of notes spelled wrong, stems and beams every which way. Speaking as a composer who writes (so to speak) using notation software, and also as a teacher whose students use software to compose, I’ve lived the best and the worst of conventional notation software.

NotateMe tries to bring us back to the handwritten process, while keeping a direct link to the digital realm via handwriting recognition and XML export. The concept is simple: write the music directly on your iPhone or iPad, and the software translates what you write, as you go, into computer-readable notation. The iPad works better than the iPhone for this, since screen real estate counts for a lot here.

[title size=”2″]XML Export[/title]
As described in the video, NotateMe doesn’t seem to do much in the way of editing the computer-readable notation once you’ve handwritten the music. But the XML export option makes it easy to transfer the results to your notation program of choice, and edit from there. Here’s the passage I wrote in the video, imported via XML into Sibelius:

[title size=”2″]NotateMe Handwriting Interpretation[/title]
As you saw in the video, the process isn’t perfect: the software doesn’t always understand what you want, and corrections and some fiddling around are necessary. It’s advertised to “learn” your handwriting, and although it did seem to get more accurate by my sixth score, neatness on my part seemed to count for more. Here are two treble clefs which it interpreted differently after “Learning 9%” (as seen in the lower left corner): 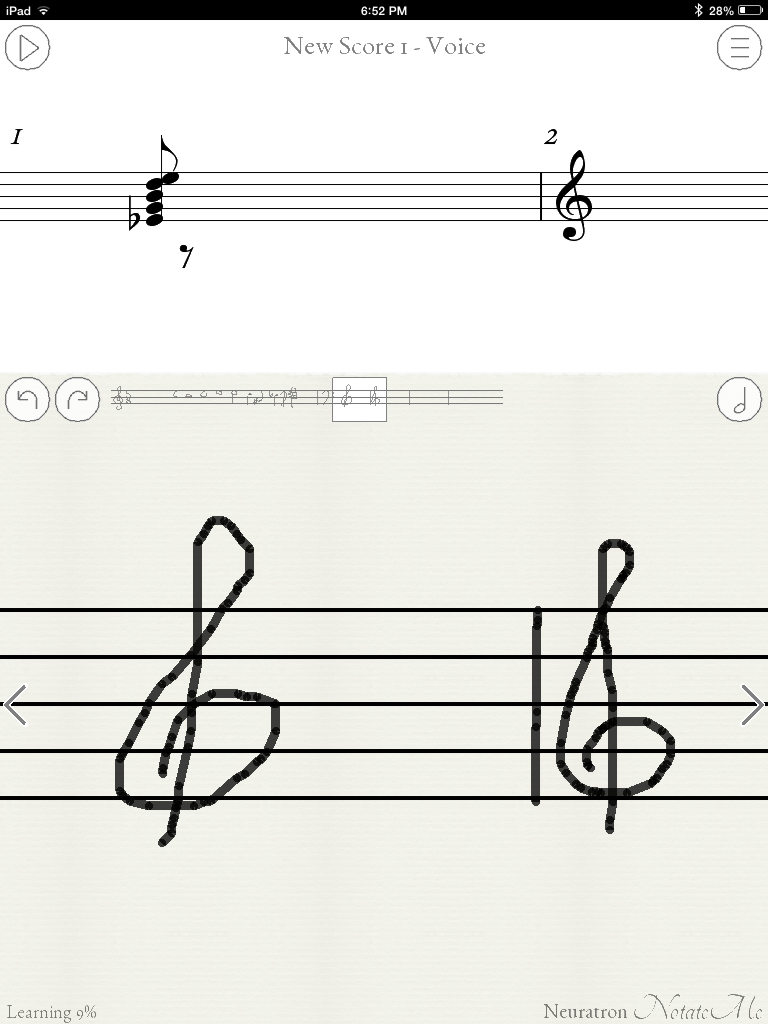 [one_half last=”no”][title size=”2″]Education[/title]As noted in the video, you have to know what you want in order to correct the program when it fails to understand you. This could be a challenge for students just starting to learn notation generally. On the other hand, a teacher can always look at the hand-written source to see what the student meant. NotateMe could perhaps be used to reinforce clear handwriting, with the success of NotateMe’s interpretation acting as a sort of robot penmanship judge. The instant playback of the notes as a student writes could also be instructive, and even short of that, might give a mini-thrill that could motivate the student.

Like all iOS apps, NotateMe is cheap compared to traditional boxed software, though not cheap compared to many apps: $21.99 in the iTunes store. It’s good the free version allows one to try the handwriting interpretation process without limit: if that doesn’t work for you, the price would seem steep.[/one_half][one_half last=”yes”][title size=”2″]In Closing:[/title]This was not an in-depth exploration of NotateMe – just a few minutes, on one staff, using the free version. Music notation is complex, and there are many notation features that I didn’t attempt to write. Still, its basic usefulness lies in how quickly and accurately it interprets your handwriting. That depends partly on the human involved. Ultimately, how useful it is would depend on what you need it for, how patient you are, and how handwriting-centric you are to begin with.

Let’s end with a nod to some of the upcoming features. It would definitely be fun to import a Beethoven symphony via XML, and then make a few improvements to his music while riding the bus with your iPad. 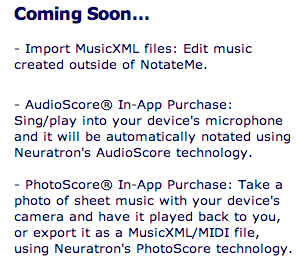 About the Author: Robinson McClellan