Home/Ear Training, Face-2-Face, Free App Friday, Higher Ed, Music Creation, Theory Tools/Octave Division: ColorScales & MicroSketch
Octave Division: ColorScales & MicroSketch
The repetitive/complementary nature of the octave is a concept all students seem to understand. Similarly, learners can easily see that in Western music, the octave can be divided into different pitch collections: pentatonic, diatonic, chromatic, etc. Further, thanks to equal temperament, it is easy to demonstrate these divisions visually and auditory on any piano keyboard. The confusion comes when we begin talking of microtonality (divisions of the octave that are smaller than a semitone). “How can there be pitches between adjacent keys on the keyboard?” Well never fear, today we will be looking at two iOS apps that put the fun back into music fundamentals.

ColorScales by Bennet Lin and MicroSketch by Op. 133 Studio LLC allows for the exploration of these smaller pitch divisions. Both of these apps use the principle of Equal Temperament to divide the octave into equal slices. As such, regardless of the number of divisions in a single octave, the distance between pitches will always be the same. Since both apps are “cracking the same nut”, it is inevitable that some of the same functionality will be will be present. Let’s start with their pros and cons and then move on to an in-tablet demo of each.

Music Toolbox demos both ColorScales & MicroSketch below, so take a look. 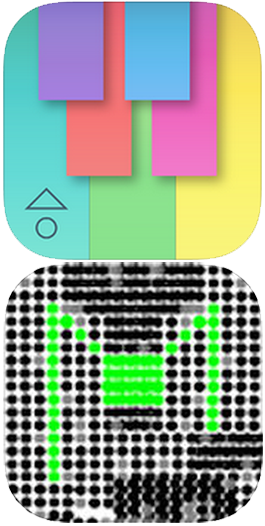